In this post, we will see the I2C bus, one of the communications available in our entire range of Arduino-based industrial controllers.
The I2C bus is of interest because, similar to what happened with the SPI bus, a large number of devices have an I2C connection, such as accelerometers, compasses, displays, etc.

In the sketch example, we have used an M-Duino 21+, but all of the industrial Arduino PLCs range of Industrial Shields can also be used to perform the same example:

This standard protocol (Inter-Integrated Circuit) was developed by Philips in 1982 for the internal communication of electronic devices in its articles. Subsequently, it was gradually adopted by other manufacturers until it became a market standard.

On the I2C bus, each device has an address, which is used to access the devices individually. This address can be set by hardware (in which case, frequently, the last 3 bits can be modified by jumpers or switches) or entirely by software.

In general, each device connected to the bus must have a unique address. If we have several similar devices we will have to change the address or, if it's not possible, implement a secondary bus.

The I2C bus has a master-slave architecture. The master device initiates communication with the slaves and can send or receive data from the slaves. Slaves cannot initiate communication (the master has to ask them), nor speak to each other directly.

The I2C bus is synchronous. The master provides a clock signal, which keeps all devices on the bus synchronized. This eliminates the necessity for each device to have its own clock, to have to agree on a transmission speed and mechanisms to keep the transmission synchronized (as in UART).

To be able to communicate with one only one data cable, the I2C bus uses a broad frame. The communication consists in:

- 7 bits to the address of the slave device with which we want to communicate.

- A remaining bit indicates if we want to send or receive information.

- One or more bytes are the data sent or received from the slave. 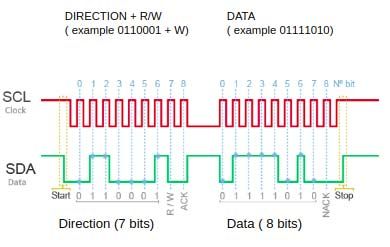 The I2C protocol provides for Pull-up resistors of the Vcc lines.

Using soft resistors means that the rising edges of the signal will be less fast, which means that we can use lower speeds and lower communication distances. If we want to use higher speeds or transmission distances, we must physically put pull-up resistors between 1k and 4K7.

Here you can find I2C resistors with DIN Rail adapter.

As we can see in this picture, the way to make the connection is just putting each SDA and SCL pins from the devices to the general lines of the master. Here you can check our I2C Pull-Up Resistor with DIN Rail adapter.

Every Industrial Shields programmable logic controller has the SCL and SDA pins. Check the User Manual of your industrial PLC controller version to see where this pins are located. Here you have the M-Duino 21+ controller Arduino example: 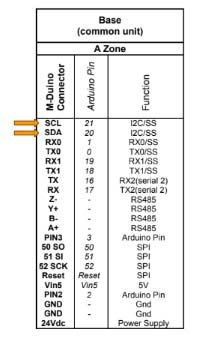 To use the Wire port on Arduino the IDE Standard provides the library "Wire.h" that contains the functions needed to control the integrated I2C hardware.

To request bytes from a slave device, used by the master.

It begins transmission to the I2C slave device with the given address.

It reads a byte that was transmitted from a slave device to a master after a call to requestFrom() or was transmitted from a master to a slave. read() inherits from the Stream utility class.
This function modifies the clock frequency for I2C communication. I2C slave devices have no minimum working clock frequency, however 100KHz is usually the baseline. 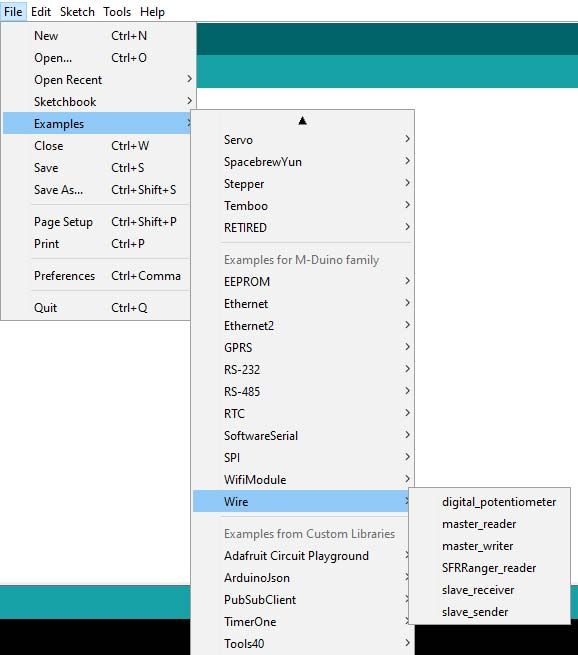 Take a look at the SPARTANS Range

The Spartan family was created from the analysis of our top-selling products.

The sum of the most common configuration among our customers and the optimization of production processes results in fully functional, robust and reliable equipment, designed for the industrial environment and at a very low cost